United States, one of the largest feed and livestock industries in the world, has more than 5,800 animal feed manufacturing facilities and producing more than 284 million tons of finished feed and pet food each year. With this amount of feed production, the country follows China, which ranks first in world feed production with approximately 240 million tons. According to a market report, the US animal feed market size was about US$72.6 billion in 2018, and it is expected to reach US$83.6 billion in 2024, representing a steady CAGR of 2.4% over the 2019-2024 forecast period.

By Derya Yıldız
United States is one of the largest feed and livestock industries in the world. According to data of U.S. Department of Agriculture (USDA), livestock and poultry account for over half of U.S. agricultural cash receipts, often exceeding $100 billion per year.

Cattle production is the most important this industry in the U.S., consistently accounting for the largest share of total cash receipts for agricultural commodities. In 2021, cattle production is forecasted to represent about 17 percent of the $391 billion in total cash receipts for agricultural commodities. With rich agricultural land resources, the U.S. has developed a beef industry that is largely separate from its dairy sector. The country beef industry is unique when compared to countries like India that produce beef from water buffalo, which are used as dual-purpose animals. In addition to having the world’s largest fed-cattle industry, the U.S. is also the world’s largest consumer of beef—primarily high-value, grain-fed beef.

The cattle herd of the country, which decreased to 88.2 million heads in the beginning of 2014, started to increase again in the following years and reached its peak with 94.8 million heads in 2019. However, January 2021 data show that herd presence decreased by 1.3 percent to 93.6 million cattle.

The U.S. hog industry has undergone significant structural changes in the last 40 years, the most of important of which has been the rapid shift to fewer and larger operations. Since 1990, the number of farms with hogs has declined by more than 70 percent, as individual enterprises have grown larger. U.S. hog operations tend to be heavily concentrated in the Midwest—Iowa and southern Minnesota particularly—and in eastern North Carolina, but hog operations are also found in Oklahoma and in Texas.

The U.S. poultry industry is the world’s largest producer and second largest exporter of poultry meat and a major egg producer. U.S. consumption of poultry meat (broilers, other chicken, and turkey) is considerably higher than beef or pork, but less than total red meat consumption. With almost 18 percent of total poultry production exported, the U.S. poultry industry is heavily influenced by currency fluctuations, trade negotiations, and economic growth in importing markets.

FEED AND FEED INGREDIENTS CONSUMPTION
According to a report published by The Institute for Feed Education and Research (IFEEDER); approximately 283.8 million tons of safe, high quality and nutritious food were fed to major species of livestock, poultry, aquaculture, and pets in 2019 with a value of $59.9 billion.

The prominent feed ingredient in US is corn. According to the IFEEDER report; corn, the most abundantly produced crop in the country, made up slightly more than half (52%) of the total amount of compounded feed consumed, and when combined with soybean meal (12%) and dried distillers’ grains with solubles (DDGs) (11%), represented more than 75% of all feed tonnage consumed in 2019.

FEED MILLS AND FEED PRODUCTION
According to data from The American Feed Industry Association (AFIA), there are more than 5,800 animal feed manufacturing facilities in the U.S. producing more than 284 million tons of finished feed and pet food each year. The mill sizes vary tremendously from a small on-farm mixer to a modern, computerized system with few human operators making more than 1 million tons of feed each year for swine or poultry operations.

According to the Alltech Global Feed Survey 2021 report; there are around 6000 feed mills in the U.S. The annual total feed production of these mills, which was 214.4 million tons in 2019, increased by 1 percent in 2020 and reached 215.9 million tons. With this amount of feed production, the country follows China, which ranks first in world feed production with approximately 240 million tons. In short, the U.S., along with China, is by far one of the two largest feed producers in the world. Brazil, which is in the third place after the U.S. in the world ranking, produces almost 1/3 of the feed of these two countries (77.6 million tons).

FEED MARKET SIZE, COVID-19 IMPACT AND FUTURE FORECASTS
According to the market report of Research and Markets (2019-2024), the US animal feed market size was about US$72.6 billion in 2018, and it is expected to reach US$83.6 billion in 2024, representing a steady CAGR of 2.4% over the forecast period.

However, COVID-19 has caused some problems and changes in the feed industry like many other industries. The U.S. feed industry is no exception.

In the reoport of IFEEDER, DIS estimated the baseline consumption at the beginning of 2020 at 252.6 million tons (excluding forages and roughages) with an estimated value of $66.7 billion, under normal production circumstances without the pandemic; with COVID-19, the consumption rate fell roughly 1.7% to an estimated 248.4 million tons, a difference of 4.2 million tons less feed consumed worth $1.6 billion, leaving the industry with a total post-COVID-19 value of $47.5 billion.

According to the Research and Markets report, rising consumer awareness about the safety of animal products couple with outbursts of diseases in animals is the major factor contributing to the increasing demand for animal feed during the 2019-2024 forecast period. In addition, presence of major market players in the region is further expected to propel the market growth opportunities in the coming years. However, stringent regulatory structure about the animal feed production is expected to hinder the market opportunities in the coming years.

On the other hand, DIS makes its future predictions through three different scenarios in the IFEEDER report;
– In a worst-case scenario, where the industry encounters further disruptions in processing and slaughter numbers or potential trade issues, DIS estimated 2025 animal food consumption could further decrease 4.5% to 237.2 million tons at a value of $45.4 billion.
– In an expected-case scenario, where the industry continues business as usual without any further major disruptions, DIS estimated that by 2025 animal food consumption could increase 2.5% to 254.6 million tons worth roughly $48.8 billion.
– In a best-case scenario, where the hotel, retail and institution sectors of the economy recover quickly and travel and trade conditions dramatically improve, DIS estimated that by 2025 feed consumption could increase 5.9.% to 263.1 million tons, valued at $50.4 billion. 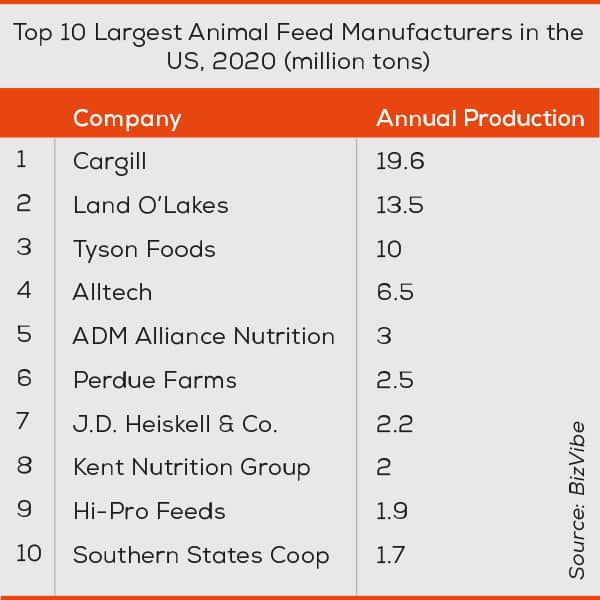